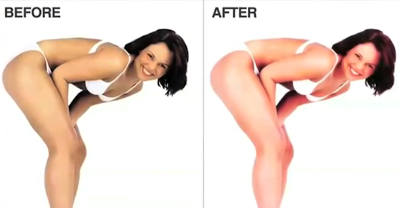 Unilever, the company that markets Dove soap with a promise of "real beauty" launched a clever app to draw attention to the way professional photographers retouch photos in Photoshop to make models look skinnier, less wrinkly, and more muscular than they really are. They launched the Photoshop Action, an app that one can use in Photoshop to apply an effect to an image with a single click — on Reddit, claiming it "helps to enhance skin tone and gives skin a beautiful glow while hiding all the imperfections." Aimed at art directors who may be creating such ads, its a downloadable file that applies an action with a single click. The action, which was disseminated on Reddit and other places where Dove thought such art directors might visit, promised to add a skin glow effect, but actually reverted the image to its original state.

This App is in continuation to Dove's decade long campaign on "Real Beauty" that sells the idea of buying Dove to find the real beauty .. in women even without the Photoshop effects .. as if looking in a mirror wasn't good enough. "Real Beauty," which won the Grand Prix at Cannes in 2007, celebrates imperfect and aged bodies of women whom the brand argues are just as beautiful, if not more so, than the pristine images of women usually displayed in advertising.

However, the brand has dealt with its own allegations of abuse of Photoshop as the audience would imagine. In 2008, artist Pascal Dangin told The New Yorker that the "Real Beauty" campaign was itself retouched. Unilever has also been accused of having things both ways since its other brands like Axe feature the Photoshopped idea of beautifull women (if not men) while Dove sells the beauty in ugliness portayed by Axe. Whats even more interesting that there are many people who seem to be using both the brands as "it makes them feel good".

Women are beautiful? The real beauty campaign is interesting. But is Dove really beautiful?

Women are beautifuI... But is Dove really beautiful???